Zbigniew Kokosiński, PhD, professor at the Cracow University of Technology, has developed a new way of playing the game of chess - that Diagonal chess. As read on the university website, the new game method is 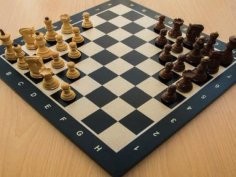 more interesting than traditional chess and also enables beginners to play with more experienced partners. As is so often the case, Professor Kokosiński made his discovery by accident.

The author of the solution checked the website The Chess Variant Pages to see that no one had come up with such an idea yet. That's how it went Diagonal chess the scientist registered it as the latest version of the game. Dr. Kokosiński works in the Automation and Information Technology Department. He learned to play chess at the age of 8. The specialist did not intend to make a revolution in the royal game. When the university introduced the obligation to work remotely due to a pandemic, it occurred to him on April 8th that chess could be played in a completely different way.

As was written in the December issue of the magazine "Unser Polytechnikum", you need to Diagonal chess no new chess board. The classic 64-foot chessboard is simply rotated minus 45 degrees from the standard setting.

As Leszek Peters explains in his article, in the starting position the white king is in the S corner (ie on the a1 square) and on the opposite side the black king is in the N corner. The kings thus occupy the most difficult places.

The white vertical can move in a north-westerly (NW) and north-easterly (NE) direction, while the black vertical can move in a south-easterly (SE) or south-westerly (SW) direction. The pawns can attack in 3 directions: white in the west, north and east, and black in the east, south and west. Kokosiński adds that the farmers in Diagonal chess have new ways of attacking and protecting themselves in comparison to classic chess.

Here, too, the rules known from classic chess apply: moving a 2-square vertical from the starting position, castling or capturing in flight. The scientist points out that it is impossible to win a game in several moves. According to Peter's explanation, the king is protected by four lines of defense (in traditional chess only by a line of pawns) and you cannot give a quick checkmate. It is necessary to fight to get to the king's opponent. Kokosiński argues that im Diagonal chess a beginner can be an almost equal partner to someone with experience. Since there is no advantage in knowing about openings, the ability to think logically is important.