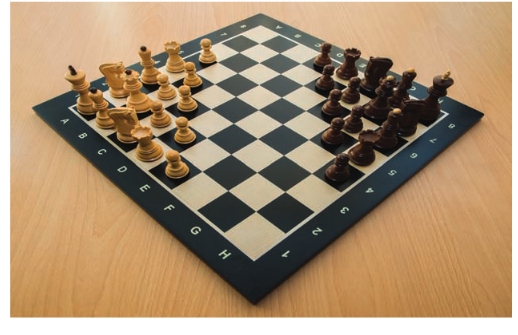 Dear readers. Due to numerous inquiries and requests for a more detailed description of the Diagonal chess rules we have decided on the article "A scientist from the Cracow University of Technology developed a new kind of chess game - diagonal chess "  to write an update.

There was already chess for three players, played on a three-sided chess board, and chess for four players, played on a chess board with 160 pieces (instead of the traditional 64). Chess games were played on 80 or 100 boards. In its day, Polish hexagonal chess pieces with hexagonal squares became popular. It seemed that everything in this field had already been invented. Zbigniew Kokosiński, lecturer at the Technical University of Cracow, however, had a completely new idea. He has that Diagonal chess designed.

Zbigniew Kokosiński, PhD, Professor of PK is a member of the Department of Automation and Information Technology at the Faculty of Electrical and Computer Engineering at the Cracow University of Technology. As a researcher he deals with advanced computer science problems, such as combinatorial object generation, parallel processors and algorithms, programmable digital systems or combinatorial optimization. He enjoys it privately Chess. He regrets that he currently has too little time for this. He learned the royal game at the age of eight when, as a pupil at Elementary School No. 11 in Kazimierz, Cracow, after class in the school's common room, he cheered on his older friends, theirs Chess duels were very popular among their peers. From them he learned the rules according to which each chess piece moves on a chessboard, and he began to play his first games, mostly with his friends. The peak of his interest in chess was during the famous championship tournaments. FIDE Spassky - Fischer (1972) and Karpov - Kasparov (1984-1985). Transcripts of the games were published in the press and could be analyzed for personal use. He later taught chess to his 4 year old son Christopher. For years he fought chess duels with him, encouraging him appropriately, but playing completely seriously, with varying degrees of luck. Interest in chess, this time from the side of computer strategies, was revived during the controversial duels between Garry Kasparov and the supercomputer Deep Blue (1997).

Zbigniew Kokosinski had no intention of starting a revolution in the Chess close. It was an accident. On a spring day, when the introduction of remote work at the university after the outbreak of the coronavirus disrupted the usual rhythm of life, he had the idea that you could play chess in a completely different way than before. It was exactly April 8th. For Diagonal chess no new board or pieces are required. The classic 64 board is sufficient to play Kokosinski's chess. It only has to - based on the standard setting - by an angle of minus 45 degree to be turned around. The field a1 should face the player playing white (to the south, S.) and the field h8 the player playing black (to the north, N). As you can see, the white king is in the starting position S corner (ie on the Position a1), and on the opposite side is the black king in the N corner. Thus the kings, with their hetmans in front of them, occupy the most difficult to access places. You will be different from the other characters and the double protection of farmers covered. The latter are seven in each suit - one less than a traditional game. At first glance, the positioning of one may be surprising Runner next to the king on one side and a knight on the other (who is not next to the king during the opening in classical chess). However, it is necessary for both pawns to move to fields with different colors. Fig. 1. Diagonal chess - initial structure and alignment of the chessboard Reinforced pieces as pieces 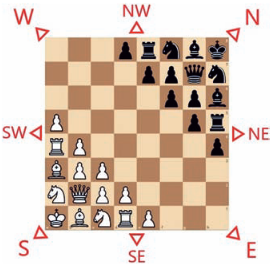 Zbigniew Kokosinski makes the following assumptions in his diagonal chess:

1. The distance between the white pawn lines a5-e1 and the black pawn lines h4-d8 (measured by the pawns' moves) is no less than in classic chess, where it is four. Meeting this condition guarantees the opportunity to develop your own defense.

2. The pawns - arranged in two rows - have identical options for moves and attacks.

Fig. 2. New possibilities for pawns: a) moves and directions of attack; b) Self-confidence 3. A farmer's promotion to hetman only takes place in seven fields: e8, f8, g8, h8, h7, h6, h5 of North quarter (N) for white pawns and d1, c1, b1, a1, a2, a3, a4 of South quarter (S) for black pawns. Two rules follow from the first and second assumptions - the movement of white pawns can only take place in NW or NE direction (black arrows in Fig. 2a), the movement of black pawns only in SE or SW direction. The pawns can attack in three directions: White in W, N and E directions (red arrows in Fig. 2b) and Black in E, S and W directions. Figure 2b shows the way in which self-organizing chains of figures are created. In this way, as Kokosiński notes, they become full partners of the pieces and create "balanced" chess.

You have to think! The author of the Diagonal chess argues that this makes the game more interesting. At the same time, a chess beginner also has the chance to be a partner of an experienced player, because knowing the openings described in detail in the literature, such as the Sicilian Defense or the King's Gambit, does not bring any advantage. The combination ability of the opponents decides. You have to think! This is the only recipe for success, claims the creator of the modernized game. The game has not changed its patron since 1946. This initially resulted in a symmetrical arrangement of the figures that reflects military power (Fig. 3). In the original variant, there was no place for the king, and the main character was the hetman, the symbol of military power. It was only later that the author of this arrangement decided that they should develop a new one Chess variant could be used. And that's how it came about Diagonal chessthat one because of its source of inspiration Royal chess could call. 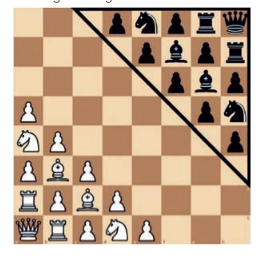 Interestingly, it wasn't originally supposed to be chess at all! It all began with an attempt to create a metaphor on a chess board for the heavily armed and threatening neighbors of the Russian Federation's Kaliningrad Oblast. Diagonal chess is a completely original project by Zbigniew Kokosinski. The author of the solution is on the Internet on the website "The Chess Variant Pages " made sure that no one has come up with such an idea. On this site the diagonal chess pieces of the Krakow scientist were called the newest variant of this centuries-old game The figures are ready for battle: the game can begin. in the Diagonal chess all rules known from classical chess apply that do not contradict those mentioned above. These are: the move of a pawn two squares from its starting position, capturing in flight, castling and the pawn promotion mentioned above. The creator of the new variant of chess points out that it is not possible to win a game in a few moves, as is sometimes the case in the classic chess happens when the opponent is weak.

The king is protected by four lines of defense (in traditional chess only by a row of pawns) and it is not possible to give an immediate mate. The opponent's king must be reached. The author of the Diagonal chess argues that this makes the game more interesting. At the same time, a chess beginner also has the chance to become a partner of an experienced player, because the knowledge of the openings described in detail in the literature, such as the Sicilian Defense or King's Gambits, brings no advantage. The combination ability of the opponents decides. You have to think! This is the only recipe for success, claims the creator of the modernized game.