Bizarre and mysterious patents owned by the US military. Mad, genius or patent troll 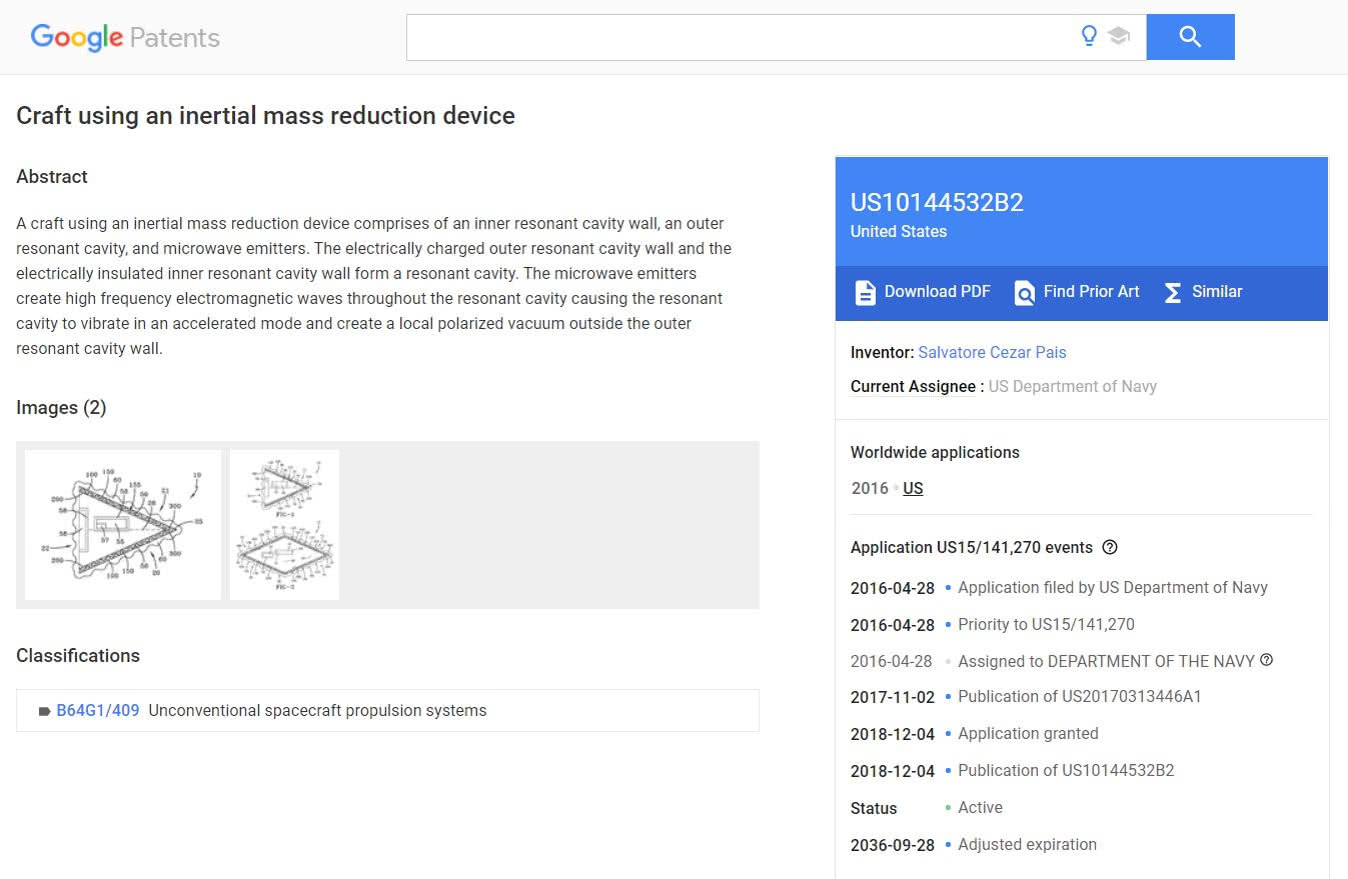 The US Navy has a technology to "improve the structure of reality", a compact fusion reactor, an engine that works on the principle of "Inertia mass reduction" works, and many other strange sounding things are patented. The US patent law in the USA allows the application of these so-called "UFO Patents". However, it is claimed that there must have been some prototypes.

At least that is what the website "The War Zone" claims, which is a journalistic investigation of this enigmatic Patent has performed. It has been proven that Dr. Salvatore Cezar Pais is behind it. Although his picture is known, journalists write that it is uncertain whether this person really exists. According to Pais, he worked for many different departments in the Navy, including the Naval Warfare Center Aviation Division (NAVAIR / NAWCAD) and the Strategic Systems Programs (SSP). SSP's mission is to provide reliable and affordable strategic solutions for the military. ”Among other things, she is responsible for developing the technology for nuclear submarine missiles of the Trident class.

All "UFO patents" in question are linked in some way. They are not only connected by the person of Pai, but also by a concept that the author himselfPais effectThis is the idea that "the controlled movement of electrically charged matter through accelerated vibration and / or accelerated rotation can generate very high energies and electromagnetic fields of high intensity".

Pais claims, for example, that with the help of suitable rotating electromagnetic fields, for example, the thermonuclear fusion reaction can control. In contrast, one of the Pais and the Navy patents describes a hypothetical thermonuclear propulsion system in a "hybrid air-space submarine." According to the Patent description such a vehicle could travel at incredible speeds over land, water and space.

Other patents alleged to be inventions by Pais that are registered as Patent with a signature of the Navy are presented in the descriptions as follows: "High temperature superconductor", "Generator for electromagnetic fields" and "High frequency gravitational wave generator".

A "High temperature superconductorsFor example, "is described in Paisa's application as a wire consisting of a metal sheath on an insulator core. An electromagnetic coil surrounds the wire, and when activated by a pulsed current, the coil causes vibrations that make the wire act as a superconductor. Everything in these patents is based on electromagnetic effects.

The titles of this Patent sound like Science fiction. Some wonder why the Navy gives these dubious inventions their brand names. The e-mail correspondence between Pais and the governance structures of the U.S. Navy suggests that there was a real internal battle going on for these patents, which the mad (or ingenious) scientist won. The patent specifications refer to some of Pais' solutions as "operational," which, according to The War Zone, means prototypes must be demonstrated to Navy officials.


The scientist's work on the compact fusion reactor was published in November 2019 in the renowned specialist journal Institute of Electrical and Electronics Engineers Transactions on Plasma Science released. "The fact that my work on designing a compact fusion reactor has been accepted for publication in a respected journal like IEEE TPS speaks volumes for its importance and credibility. my advanced physical Concepts could eliminate (or at least mitigate), "Pais commented to The War Zone. He added," High-energy electromagnetic radiation can interact locally with the vacuum energy state (VES). The VES is the fifth aggregate state of matter, ie the fundamental structure (basic structure) from which everything (including space-time) in our quantum reality arises ".

If we look in the US patent database, we will find these "UFO patents" from Pais together with a clear assignment to the US Navy.