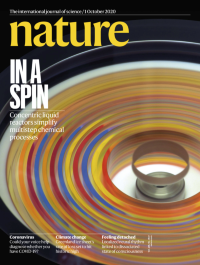 Thanks to centrifugal force and the use of liquids of different densities, self-organizing chemical factories can be developed. The idea for spinning reactors proposed by Poland is not only clever but also beautiful. The research was placed on the cover of the prestigious magazine "Nature".

The Polish-Korean team showed how a whole series of complex chemical reactions can be carried out at the same time - without resorting to complicated plant systems, ... centrifugal force. The first author of the publication is Dr. Olgierd Cybulski, who works at the Ulsan National Institute of Science and Technology (UNIST) in South Korea.

- We show how to prepare self-organizing chemical factories - describes the corresponding author of the publication, Prof. Bartosz Grzybowski (also UNIST and the Institute of Organic Chemistry of the Polish Academy of Sciences). He adds that he already has an idea how to make such a chemical spinning reactor ... to recover lithium from liquids in batteries.

The fact that liquids of different densities can form unmixed layers can even be observed during lunch - while staring at broths. Soup fat floats on top because it is less dense than the watery part of the soup.

At home, a more complex experience can be had: many liquids of different densities are slowly poured into a single vessel one at a time. You can start with the densest honey, maple syrup, dish soap, water, vegetable oil to the rarest kerosene. If this happens slowly enough, you will see layers of different colors separated from each other and not mixed in this (inedible) so-called density column.
But if such a density column begins to rotate very, very quickly - to rotate the vessel around a vertical axis (like on a pottery wheel, but much faster - e.g. 2,6 thousand revolutions per minute), it turns out that the subsequent layers form concentric rings. The lightest liquids are smaller in diameter and placed closest to the center of the centrifuge, while the densest are placed in large rings closer to the edge of the centrifuge. Centrifugation is an important factor here as centrifugal force begins to dominate the surface tension of the liquid. Very thin layers of liquid - up to 0,15 mm or even thinner - can be achieved without the risk of mixing. If the density of the liquid is chosen correctly, scientists have shown that up to 20 colored rings can be obtained in a centrifuge that rotates around a common axis.

The spinning column of density is in itself an extremely aesthetic physical experiment. However, Prof. Bartosz Grzybowski and his team have shown how much chemists can make use of it. Rotating liquids of different densities can be made so that each of them contains a different reagent that is needed for the chemical reaction.

Let's assume that a chemical compound is poured right into the center of the centrifuge. It spreads through the centrifuge and begins to diffuse upon contact with the rarest, innermost layer. But there the chemical reaction takes place and a new chemical is formed. It also starts the diffusion and reaches the next, denser layer where the next chemical reaction takes place. Another product is created. And so on, until we get the final product from the starting product.

Thanks to the spinning density column, many chemical reactions take place spontaneously one after the other. No series of experiments, many containers, mixers or tubes are required.

Since the rings are very thin and their contact area is large, the diffusion of the connections between the rings takes place in a relatively short time (much shorter than when the column is stationary).
Possible applications

Prof. Grzybowski points out that such self-organizing chemical plants can find industrial application - for example for the separation of components from mixtures. In a publication in Nature, researchers have shown how amino acids (protein components) can be obtained from fermented wort in such a spinning experiment.

- This could be done in a similar way for the recovery of lithium from the mixture after batteries. And there are still no good methods for doing this, "says the chemist.