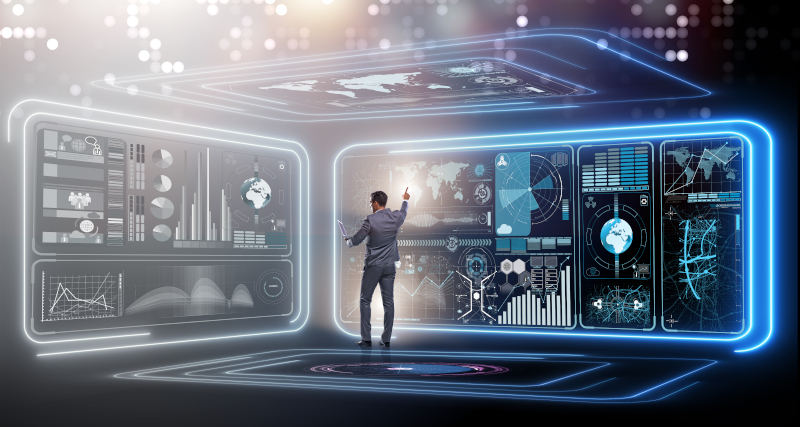 Welcome to our “Science Tank” section. In this area of ​​the website, we deal with relevant discoveries from the world of science (physics, mathematics, computer science, medicine and many more) in an interdisciplinary manner. We publish important achievements from around the world with a special focus on the scientific environment in Göttingen. Have fun and stay curious.

Using carefully prepared nanomaterials, scientists at Tokyo University of Agriculture and Technology succeeded in “bending” the laser beam in such a way that a holographic image with previously unattainable properties was created, which observers compared with the holograms known from the "Star Wars" series . Thanks to the new technology, the image of a rotating globe was created. The work of the Japanese research team was described in the journal "Optics Express".

Co-design of electronics with microfluidics for more sustainable cooling

Thermal management is one of the most important challenges for the future of electronics. With the steadily increasing data generation and communication rate as well as the constant urge to reduce the size and cost of industrial converter systems, the power density of electronics has increased. As a result, cooling, with its enormous energy and water consumption, is having an ever greater impact on the environment, and new technologies are needed to generate heat in a more sustainable way - that is, using less water and energy. Embedding the liquid cooling directly into the chip is a promising approach for more efficient thermal management. However, even with the most modern approaches, electronics and cooling are treated separately, so that the full energy-saving potential of the embedded cooling remains unused. The office of the Federal President today announced the nominees for the German Future Prize 2020 in the Hall of Honor of the Deutsches Museum in Munich. In the circle of the best - the three projects for the final round of the Federal President's Prize for Technology and Innovation - is a team of experts from TRUMPF, ZEISS and Fraunhofer IOF: With their project "EUV lithography - New light for the digital age", Dr. . Peter Kurz, ZEISS Semiconductor Manufacturing Technology (SMT) division, Dr. Michael Kösters, TRUMPF Lasersystems for Semiconductor Manufacturing, and Dr. Sergiy Yulin, Fraunhofer Institute for Applied Optics and Precision Mechanics IOF in Jena, nominated.

Estimating future events is a difficult task. Unlike humans, machine learning approaches are not regulated by a natural understanding of physics. In the wild, a plausible sequence of events is subject to the rules of causality, which cannot simply be derived from a finite training set. In this paper, researchers (Imperial College London) propose a novel theoretical framework to carry out causal predictions of the future by embedding spatiotemporal information in a Minkowski spacetime. They use the concept of the cone of light from the special theory of relativity to restrict and traverse the latent space of the anarbitrary model. They demonstrate successful applications in causal image synthesis and the prediction of future video images on an image data set. Its framework is architecture and task independent and has strong theoretical guarantees for causal capabilities.

The Laser-Laboratorium Göttingen eV wins this year's tender for GO-Bio initially from the BMBF.

The project "Optoacoustic sensor system for monitoring infusions" (Oase) of the Photonic Sensor Technology department made it into the first of two phases of the Go-Bio inital funding measure. In this highly competitive tender by the BMBF, 41 of 178 project ideas with recognizable innovation potential were approved for the exploratory phase.

The last article had a nice response (thanks for that). So today something from the world of "forgotten math" - have fun!

Arithmetic can often not prove some of its strongholds by vague means. In these cases we need more general algebra methods. For these types of arithmetic theorems, which are algebraically justified, there are many rules for abbreviated arithmetic operations.

In the old days without computers or calculators, great arithmeticists used many simple algebraic tricks; to make your life easier:

The "x" is representative of multiplication (we were too lazy to try LaTeX :-))

Can you solve it in your head?

It's also easy to understand what's going on here:

OK so far so good. Now let's try to do the math quickly - even combinations like

What happened here? We can write down the factors as follows:

Scientists have discovered that electrical currents can form in ways that were previously unknown. The new findings could enable researchers to better bring the fusion energy that powers the sun and stars to Earth.

For a planar electrostatic wave interacting with a single species in a collision-free plasma, conservation of momentum implies conservation of current. However, when multiple species interact with the wave, they can exchange an impulse, resulting in a current drive. A simple, general formula for this driven current is derived in the work of the physicists. As examples, they show how currents can be driven for Langmuir waves in electron-positron-ion plasmas and for ion-acoustic waves in electron-ion plasmas.

Today something from the category "forgotten math". There are always very interesting algebraic number relationships that are unfortunately rarely or not at all in the curriculum, but which expand the understanding of numbers and mathematical intuition.

Let's say someone asks you to solve the next equation without any technical tools.

Can you do this?

Ok at first sight is not that easy. But when you know the special and interesting relationship between these numbers, it's really simple:

Ok, let's use simple algebra to find out if we can find more such sequences: The first number we are looking for is "x":

The mass of the deuteron is said to be 0,1 billionth of a percent less than the value stored in specialist literature! More than 100 years after the discovery of the atomic nucleus, it is still unclear how heavy individual specimens are. The research team led by Sascha Rau from the Max Planck Institute for Nuclear Physics in Heidelberg succeeded in making an excellent “update”.

The masses of the lightest atomic nuclei and the electron mass are linked, and their values ​​influence observations in atomic physics, molecular physics and neutrino physics, as well as in metrology. The most accurate values ​​for these fundamental parameters come from Penning Fallen mass spectrometry, which achieves relative mass uncertainties on the order of 10E (-11). However, redundancy checks using data from various experiments reveal significant inconsistencies in the masses of the proton, deuteron, and helion (the core of helium-3), suggesting that the uncertainty of these values ​​may have been underestimated.

Tiny devices have been developed that can act as the legs of laser-controlled microrobots. The compatibility of these devices with microelectronic systems suggests a route to mass production of autonomous microrobots.

In 1959, Nobel laureate and nanotechnology visionary Richard Feynman suggested that it would be interesting to "swallow the surgeon" - that is, build a tiny robot that could move through blood vessels to perform surgery if necessary. This iconic vision of the future underscored the modern hopes in the field of micrometer robotics: to deploy autonomous devices in environments that their macroscopic counterparts cannot reach. However, building such robots presents several challenges, including the obvious difficulty of assembling a microscopic locomotive. In an article in Nature, Miskin et al. via electrochemically powered devices that propel laser-controlled microrobots through a liquid and that can be easily integrated with microelectronic components to create fully autonomous microrobots.

How Scientists Can Stop Being Fooled About Statistics

Collecting simulated data can reveal common ways in which our cognitive biases lead us astray.

Numerous efforts have been made over the past decade to promote robust and credible research. Some focus on changing incentives, such as changing funding and publication criteria, to favor open science over sensational breakthroughs. But attention must also be paid to the individual. Overly human cognitive biases can lead us to see results that are not there. Faulty reasoning leads to sloppy science, even when the intentions are good.