Parker Solar Probe is closer to the sun than ever before 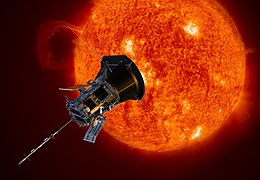 The probe that flies to the sun - the Parker Solar Probe (PSP) - recently broke two records. It is once again the fastest moving human-made object and the closest object to the sun. The probe is currently in the middle of its 10th close encounter with our star.

According to NASA, on November 21, the probe came at a speed of 586.864 km / h up to 8,5 million kilometers to our star. In the following rounds, PSP will continue to accelerate and get closer. The probe is gradually moving away from the Sun and between December 23rd and January 9th will send back to Earth the data it collects during its encounter with the Sun.

The Parker Solar Probe is a device the size of a small car. His goal is that Atmosphere of the sunwhich is about 6,5 million kilometers from the surface of our star. The main objective of the mission is to study how energy and heat move through the sun's corona and to answer the question of what accelerates the solar wind. The scientists have high hopes for the mission and hope that it will improve the understanding of sun, Solar system and will revolutionize earth.

The probe has to withstand temperatures of up to 1.370 degrees Celsius. A 11,5 centimeter thick thermal protection system made of carbon fiber composite material will help him with this. It is designed to protect four scientific instruments that examine magnetic fields, plasma and high-energy particles and map the solar wind. The devices are to be operated at room temperature. The TPS consists of two panels Carbon fiber composite with 11,5 centimeters of carbon foam in between. The side of the shield that faces the sun has been given a special white layer that makes the thermal radiation reflected. With a diameter of 2,5 meters, the shield weighs only 72,5 kilograms.

To the strong Gravity To avoid succumbing to the sun, which makes up 99,8% of the mass of the solar system, the PSP must reach a speed of at least 85.000 km / h. This is not an easy task, which is why the vehicle is supported up to seven times by the force of gravity from Venus. In the end, it will be at a record-breaking distance of 6 million kilometers from the surface of our star. It will also be the fastest vehicle in human history. Its speed becomes almost 700 km / h.

So far, the probe has benefited from Venus' gravity five times. The most recent, the 5th flyby, took place on October 16. Next year PSP will approach the sun 4 times. The next encounter with Venus is planned for August 21, 2023. The last time the minimum distance will be reached will be on December 12, 2025.