How big can black holes be? Scientists suspect the existence of galaxy-sized black holes 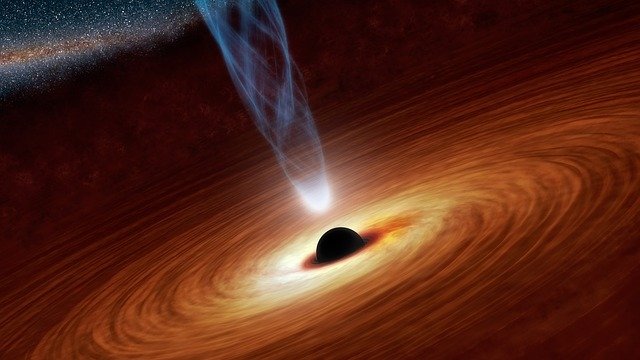 The most massive are observed in the centers of large galaxies. They reach masses tens of billions of the mass of our sun. But a new study suggests that much larger black holes could exist, and in the new study, researchers at Queen Mary University London wanted to better understand black holes and limit how big they could be. In the work that appeared in the journal Monthly Notices of the Royal Astronomical Society, scientists proposed a new class of black holes - stupendously large black holes (SLABs).

The researchers initially indicated that there was no evidence for the existence of black holes more massive than those we observe in the centers of the most massive galaxies. - We already know that black holes exist over a wide range of masses, with a supermassive black hole of four million solar masses in the center of our galaxy, "explains astronomer Bernard Carr of Queen Mary University London - although there is currently none With evidence for the existence of SLABs, it is conceivable that they could exist and be outside of galaxies, in intergalactic space, which has interesting implications for observation, he added.

However, these explanations do not fit all observed black holes. Supermassive black holes were found in the early universe. Because of their age, it is difficult to explain their formation by the absorption of the surrounding mass so early in the existence of the universe (it is a relatively slow process). Scientists have found hundreds of such objects that they believe were formed only 700 to 800 million years after the Big Bang. They originated in the earliest ages of the universe and just didn't have the time to grow like that. The question astrophysicists ask is: How did these black holes get so big in such a short time? So-called primordial black holes can help. This concept was first proposed in 1966. These hypothetical objects would have formed shortly after the Big Bang. According to this, the different densities of the early universe could have created pockets so dense that they collapsed into black holes. These would not be subject to the size restrictions of black holes from collapsing stars and could be very small or, well, astonishingly large. This concept assumes that the original black holes with the smallest masses no longer exist. However, there can still be those with larger masses. During all these billions of years they could have absorbed the matter around them and reached really large sizes in the process. In the new study, the scientists calculated that the amazingly large black holes could have a mass between 100 billion and 1 trillion times the mass of our sun. That would be the greatest of the SLABs more massive than the Milky Way, whose mass is estimated to be 890 billion times our sun.